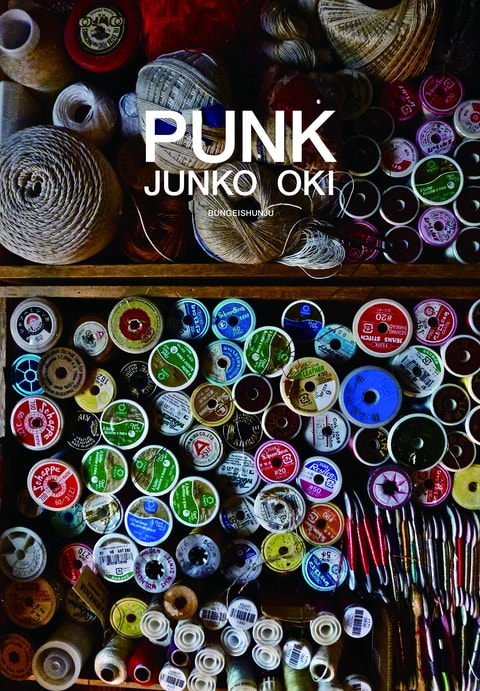 Embroidery artist Junko Oki has received a host of praises from art enthusiasts and collectors in France, United Kingdom, Germany, Holland, Switzerland, Taiwan and many other countries as well as in Japan. Her artwork consists of thousands of stitches applied to materials like washi (Traditional Japanese paper) and antique fabrics. We talked with her about her work and her long awaited first photo art book that will hit the shelves very soon. (For the Japanese language text, go to http://hon.bunshun.jp/articles/-/2998)

-- I heard that you started your embroidery art in 2002, just before you turned forty. It was rather a late start to embark on a completely new frontier, wasn't it? What did you do before that?

I was working for a company. I was in charge of designing packages for character goods as well as production control of the merchandise. Now I think of those days as a good experience, but at the time, I was very unhappy that my creativity was restricted to the confines of industrial demands. With my fortieth birthday quickly approaching, I spent my days writing about what I would be doing ten years from then. I thought that writing about what I would be doing in the future would help to move myself in the right direction. I wrote "I will be making my living with my art" or "I will be engrossed in planning my next exhibition." I was trying desperately to find a way to express my art. At the same time, I applied to competitions in design as well as in oil painting. I also started learning about glasswork. Maybe I was too desperate.

Around that time my daughter, then a junior high school student, made a small bag from the Liberty fabric that my late mother had collected and handed down to me. She just cut the fabric, stitched it up and embroidered it in whatever way she wanted. She gave it to me as a present. I was shocked. My first thought was "Oh no! How could she cut up the precious fabric?" But the bag had a very powerful energy radiating from it. I supposed it was because the bag was made with pure joy of making it and nothing else. It came out from her heart's desire. I was much moved. Then I realized, "Yes, it's fine with this. It's the way I should go." I decided to make it simple, so I took a needle and thread which I had at hand, and started to work.

I started embroidery with white thread when I was waiting for my turn at a hospital. To kill time I just idly stitched with what I had in my portable sewing box. There was only white thread in the box so I had to use it! Stitching is a very simple process and you can start right away if you want to. I am not good at something that requires complicated planning before beginning. I believe the steady pace of stitching is just right for me. When you are stitching, you can go sideways if you like. Even if you find a tangled-up thread, you don't have to cut it off, you can leave it to create a new pattern. In other words the path is endless and you can keep on going - no turning back. I know I have found my place, my expression.

-- Your embroidery is quite different from the traditional, at home kind of embroidery that we often see, isn't it?

I studied traditional embroidery for a while, but many of them required complicated planning which I was not the best at, so before long I deviated from that practice and started running my own course. After I saw the works of Antoni Tapies [Note: Tapies is a Spanish artist. He started as a painter and was influenced by Paul Klee. He gradually moved on to mixing various things with his water color paintings as well as using threads and carpets to create his own art.] I thought it was perfectly all right to be free and not follow the regular patterns that was required in traditional embroidery. So my method of artistic expression is to keep on adding stitch after stitch until I finish a work of art.